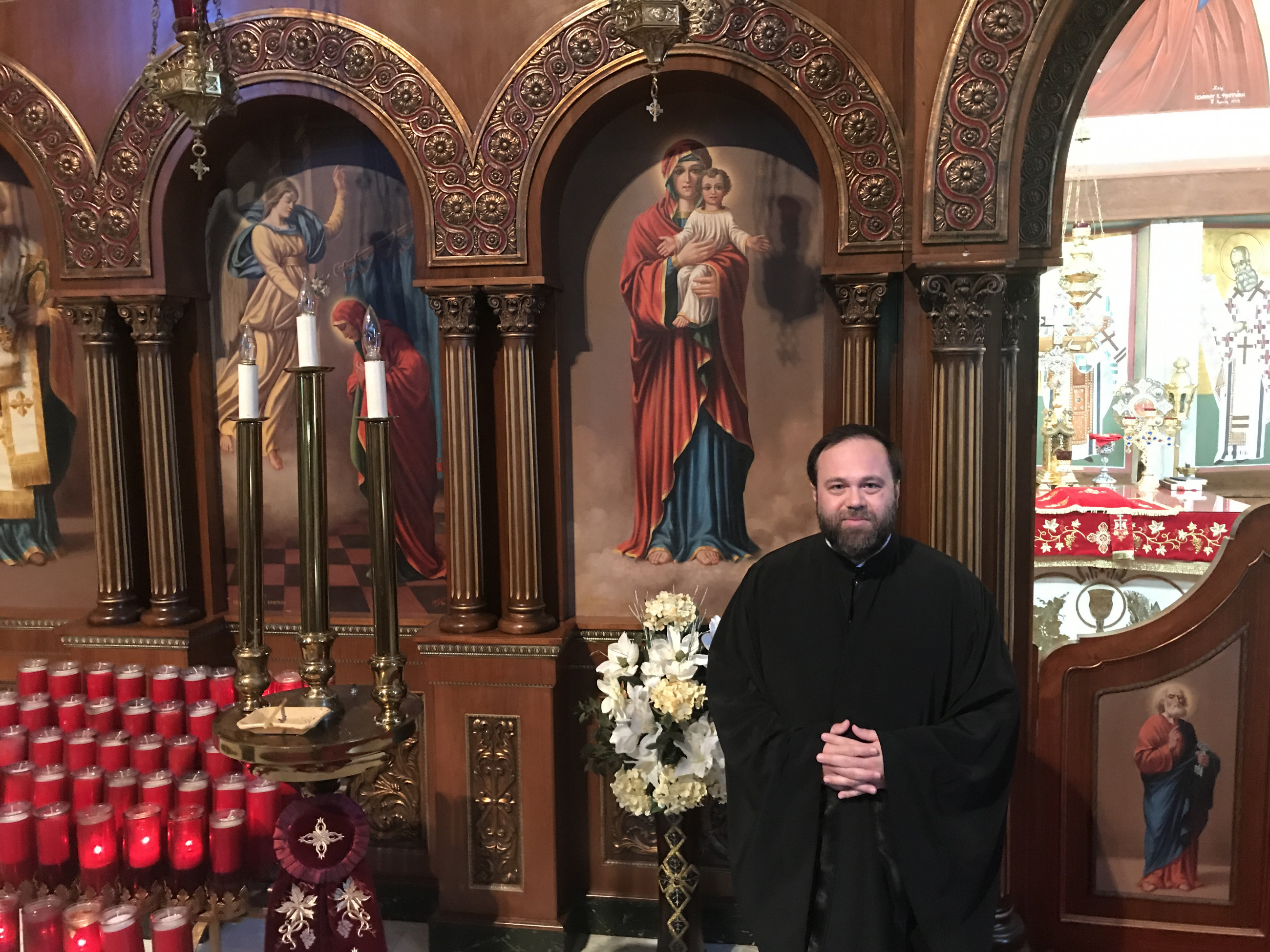 Fr. George Kouzelis was born in 1976 in Athens, Greece. In 1994 he graduated from the Ecclesiastical High School of Athens. In 1998 Fr. George received a Bachelor’s Degree in Theology from the University of Athens. He also received a Master of Theology with highest distinction from Holy Cross Greek Orthodox School of Theology in Brookline, MA.

He studied Byzantine Ecclesiastical Music under Photios Ketsetzis, Spyridon Peristeris and Spyridon Voutsinas. He has a Certificate in Byzantine Music and a Diploma in Byzantine Music from the Conservatory of Aegaleo. Fr. George attended as a member of the Choir of the Annunciation Cathedral of Athens. He was also Lampadarios (left chanter) in Sts. Constantine and Helen’s Church in Omonia, Athens.

From 2001 to 2003 Fr. George spent time in Stuttgart, studying the German language and doing research at Tübingen University (Germany). In 2011 Fr. George was awarded a Ph.D. in Theology from the University of Athens, receiving a unanimous grade of “Excellent.”

In 2011, Fr. George was ordained to the Diaconate by His Eminence Metropolitan Panteleimon of Coroneia (Archdiocese of Athens) then in 2012, was ordained to the Holy Priesthood by His Eminence Metropolitan Methodios of Boston. Fr. George has served the Greek Orthodox Metropolis of Boston for three and half years. Fr. George has also served the Greek Orthodox Metropolis of New Jersey for four years.

In September 2019 Fr. George was appointed by His Eminence Metropolitan Alexios of Atlanta presiding priest of the Annunciation of the Most Holy Theotokos and Ever-Virgin Mary Greek Orthodox Church in Winston-Salem, NC.

Fr. George is married to Presvytera Stavroula and has two children, Maria Nektaria and Panayiotis. 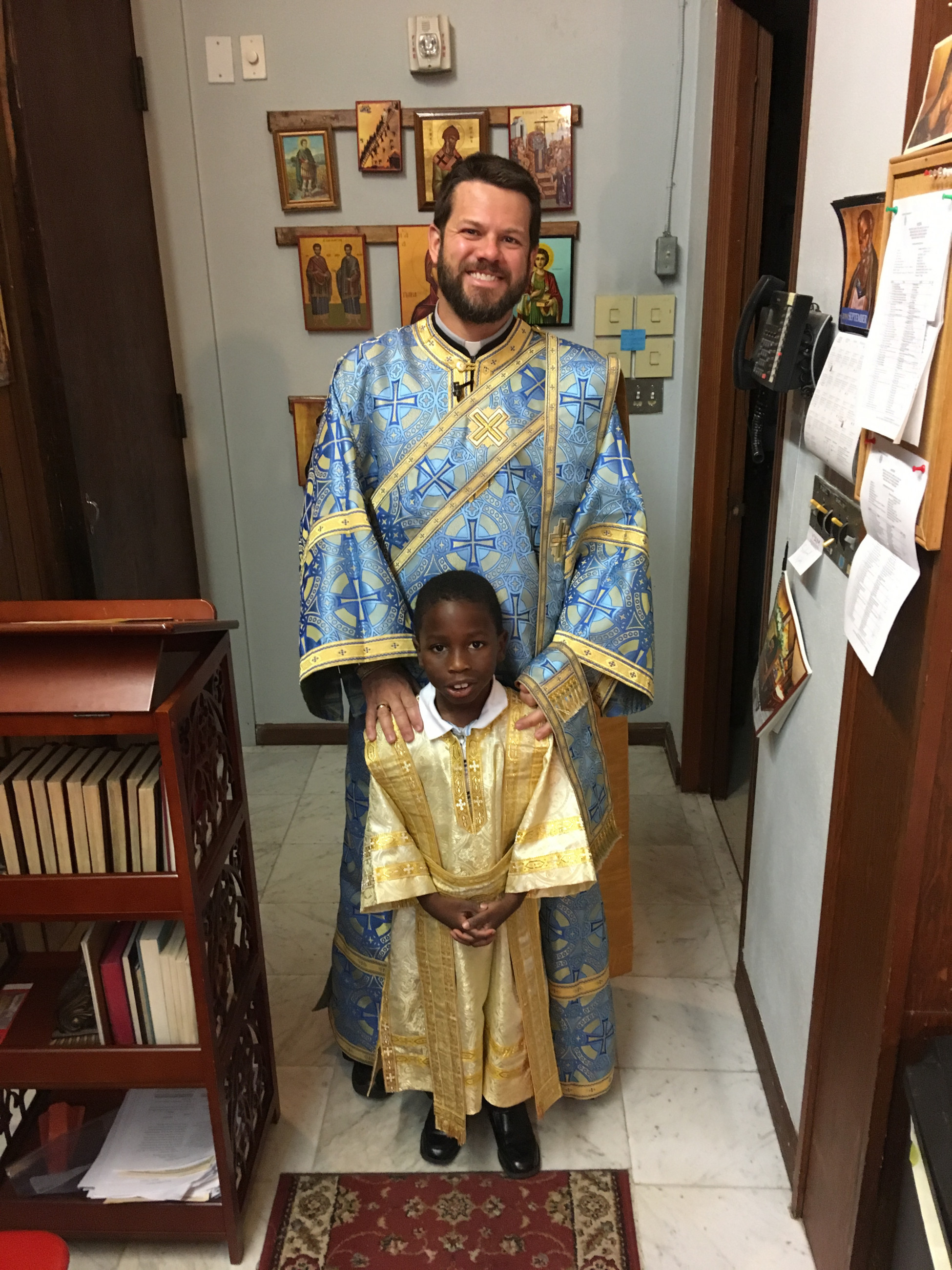 Deacon Christopher (Dn. Chris) was born in Orlando, FL. He is a convert to the Orthodox faith and was received into the Church in 2004, the same year that he graduated from the University of Central Florida with a B.S in Mechanical Engineering.  Dn. Chris completed the Diaconate Program at Holy Cross Greek Orthodox School of Theology in Brookline, MA in 2013. He was ordained to the Holy Diaconate in 2014 by His Eminence Metropolitan Alexios. Dn. Chris and his family moved to Winston-Salem in 2019 and he currently works for Siemens Energy in Rural Hall.

Dn. Chris is married to Diakonissa Agape (Dka. Amy) and they have two daughters, Theodora (Teddy) and Justina, and one son, Nathaniel.

In addition to serving at the Divine Liturgy, Dn. Chris assists in directing the Hope & Joy ministry with Dka. Amy, Lauren Kazakos, and Nia Kazakos. 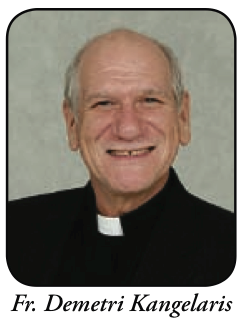 Fr. Demetri Kangelaris was born in Jerusalem, Israel, and came to the United States in 1973 to complete his studies. He attended Holy Cross Seminary, and was Ordained to the Holy Priesthood in June of 1981.

Fr. Demetri and Olga were married in Portland, Maine in 1977. They have 2 adult children, Katina and Michael, and have been blessed by 2 grandsons, Hunter Thomas and Blake Demetri.
He has served in 3 parishes: St Sophia in Los-Angeles, CA., St George in Oklahoma City, OK, and the Annunciation in Winston-Salem, NC. Pastoring the Annunciation has been a special blessing, as the community is strong, active, diverse and responsive.
In addition to his duties at Annunciation, Fr. Demetri served as Vicar of the NE. Conference, representing Metropolitan Alexios in 15 parishes located in North Carolina and Tennessee.
In 2019, after 30 years at the Annunciation Fr. Demetri Kangelaris retired from his position as Proistamenos of the Annunciation. 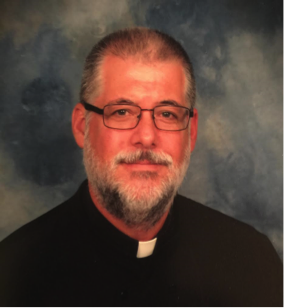 Fr. Costa (Millard) Shepherd is a native of the Winston-Salem area. He is a convert to the Orthodox faith and came into the church in 1988. He is a former law enforcement officer, who retired after 30 years of service. Fr. Costa completed his Master’s Degree in Applied Orthodox Christian Theology through the St. John of Damascus Institute of the University of Balamand, Antiochian House of Studies. He was ordained to the Diaconate in 2010 and to the Priesthood in 2016 by His Eminence Metropolitan Alexios.

Fr. Costa is married to Presvytera Stacy and they have two sons James, and Speros who is married to his wife Lauren, and one grandson Logan Thomas.

Fr. Costa, in addition to his work with the ministries of the parish, serves as one of the directors of the Metropolis of Atlanta’s St. Stephen’s Summer Camp, is involved in volunteer Crisis Chaplaincy with local emergency responders, is a member of the International Orthodox Christian Charities (IOCC) Frontline Disaster Response Team, and serves as a campus minister for Orthodox Christian Fellowship (OCF) at Wake Forest University.

On February 1, 2021, Fr. Costa Shepherd was reassigned by His Eminence Metropolitan Alexios of Atlanta to serve as the Director of the Metropolis' Diakonia Retreat Center.